This week I appeared on CNBC’s Street Signs to comment on a new study that shows the United States of America is the only rich, Western country to offer NO paid, mandatory vacation.  None.  Zip.  Zero.

Of course, afterwards I thought of a great comeback to host Brian Sullivan’s Renault curveball…”But I have driven a BMW, and Germany mandates 34 days off, versus France’s 31 days.”  Oh well.


It’s not as if the other countries are only marginally better, offering two, or maybe three, mandatory, paid vacation days.  Nope.  The country second to last on the list before the U.S., Japan, mandates ten days.  Ten.

To get a sense of just how far off the bell curve the U.S. ranks, here’s the comparative chart from the “No-Vacation Nation Revisited” study by the Center for Economic and Policy Research (that’s us on the very far right where is says “0”): 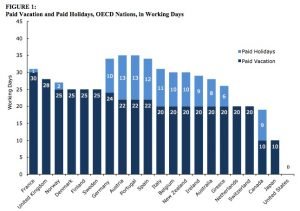 Now, I’m not under any illusion that the U.S. will offer European, or even Canadian, level paid days off; however, the simple fact is that every single one of these countries can’t be wrong.  There must be some valuable return from this investment or they wouldn’t keep doing it.  What is it?

What can we learn and then adapt to our culture and economy? What should mandatory, paid vacation and holidays look like in the U.S.?