I felt a twinge of nostalgic sadness when I heard that Barbara Billingsley (a.k.a June Cleaver) died this past 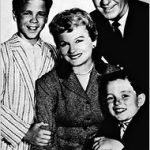 weekend.  As a child in the 70’s, I’d watch reruns of Leave it to Beaver when I stayed home sick from school sipping on Campbell’s Chicken Noodle soup and nibbling on Saltines.  I loved the antics of the Beaver and Wally, and the way Mrs. Cleaver handled it all without ever breaking a sweat or raising her voice.

But it wasn’t until my newly-divorced, newly-working mother of three declared, “I’m done being June Cleaver” that I began to realize that she was more than just Beaver’s mother.  She represented something that my mother felt she had to actively reject in order to survive.  But what?

When I became a working mother and wife 12 years ago, I finally understood.  To my mother and tens of millions of other women, June Cleaver had become an unrealistic, unattainable bar against which women in general, and mothers specifically would be judged by themselves, by men, and by society.  In order to survive, my mother felt she had to either reject June Cleaver, the icon, or wither under the relenting assault of guilt for not measuring up (see great post by my friend, Morra Aarons-Mele, “Working Mom Guilt is a Political Issue”).

According to her obituary in The New York Times, Billingsley, “…acknowledged 40 years later, her role was a picture-perfect reflection of the times. ‘We were the ideal parents because that’s the way he saw it,’ she said, describing the show as the world seen through the eyes of a child.”

This quote made me wonder, did we all miss the joke?  Did we understand that the image of perfection against which mothers have been measured for 50 years represented the fantasy of a 10 year old boy?  I honestly don’t think so. And now that we are finally in on the secret, can we move on?

Can women follow my mother’s lead and comfortably reject June Cleaver as the bar of success?

Can men stop looking for and expecting June Cleaver to greet them at the door and mother their children while contributing meaningful amounts of money to the family’s coffers?

Can company leaders, many of whom–like me–grew up charmed by the wonder that was June Cleaver, realize she never existed and never will exist.  And as a result, support the creation workplaces and cultures that support real women, men and families.

Can public policymakers stop clinging to the ideal when they cut child care, eldercare, and after school programs because June’s at home taking care of everything.  She’s not!  And she never was.

And then there’s the irony that the woman who portrayed June Cleaver, Barbara Billingsley, was herself a divorced working mother of two.

It wasn’t Barbara Billingsley’s job to point this fact out to the world.  She was being paid to play a character and she did it beautifully.

But perhaps it would have made a difference to know that the woman behind the character wasn’t a perfect suburban stay-at-home mother.  She worked and was paid to support her sons.  That’s not to say the choice not to work is wrong.  But let’s understand and acknowledge that June Cleaver wasn’t even June Cleaver and judge ourselves and others accordingly.

So, good-bye Mrs. Cleaver.  Thank you for keeping me company and making me feel safe as a little girl wrapped in a blanket on the couch as you lit up the screen.  Even more, thank you Barbara Billingsley for letting me in on the secret…you weren’t real.  You were a mother, just like me, trying to do what’s best for you and your family.