I waited.  I knew it was coming.  As expected, shortly after the release of The Shriver Report: A Woman’s Nation Changes Everything the calls and emails began rolling in, “What do you think?”  Earlier this year, I’d dodged that question when Womenomics was released.  At the time, I thought I didn’t need to add my voice to the mix because of course by now most people understood that work+life flexibility was an issue for everyone.  Not just women.  Future efforts would certainly discuss the issue from an inclusive, gender neutral, business based perspective.  I was confident this would be the last high-profile, big media launch of a book or program that focused on work+life flexibility primarily in the context of women.

I was wrong.  The launch of A Woman’s Nation was even bigger and bolder.  So, for what it’s worth and because people keep asking me, it’s time to answer the question, “What do I think?”  First, let me say a couple of things.  Like Womenomics, The Shriver Report is well done and well intentioned.   In fact, two of my favorite thinkers, Brad Harrington of Boston College’s Center for Work and Family, and the writer/feminist, Courtney Martin, contributed excellent chapters.  Issues such as pay inequity, lack of representation in senior levels, and sharing of care responsibilities are all important issues to discuss specifically as they relate to women, but…

We really, seriously, once and for all, need to stop talking about the need for work+life flexibility solely in the context of women! 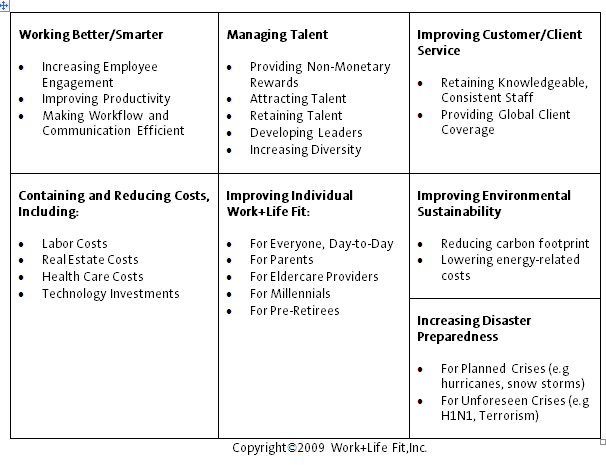 I fear it inadvertently reinforces the Motherhood Penalty

As Kanter award-winning researcher Shelley J. Correll of Stanford University found in two separate studies: Evaluators consistently rated mothers less competent and less committed to paid work than non-mothers, and childless women received 2.1 times as many callbacks as mothers with similar credentials.  There’s a deep, entrenched bias in the system that says if you hire a mother, it’s a problem.  So don’t hire her.  (Check out the work of Harvard’s Mahrazin Banaji for more on entrenched bias—hat tip: Maryella Gockel, of E&Y).

When a book, report or press conference is entitled Womenomics or A Woman’s Nation, no matter how much you say, “It’s not just about women,” it is about women.   By linking the need for greater work+life flexibility so directly and publicly to women and mothers, I’m afraid it perpetuates this inaccurate perception that mothers are the only ones who can’t make it work without extra accommodations.  It doesn’t challenge or change the prejudice.

It further isolates men, who want to be part of the conversation but won’t participate is something they perceive to be a “women’s thing.” (Really, you can’t blame them.)

Today, work+life strategies are ghettoized outside of the day-to-day operating model of business.  In many organizations work+life issues are discussed, if not solely, then primarily as part of the women’s initiative.  In the media, coverage of the topic is confined almost exclusively to women’s magazines or articles focused on women.  Even though research shows that men suffer from higher levels of work+life conflict than women, and are just as interested in work+life strategies.  But they are usually left out in the cold.

My experience is that if you make the discussion gender neutral, and get senior line leadership support, the men will flood in.  A couple of years ago, I conducted a series of work+life fit strategy seminars at an investment bank.   The first two sessions were sponsored by the company’s women’s leadership group.  Although men “are encouraged and welcome to attend,” not surprisingly, the majority of attendees were women.  A few brave men were scattered about the room.  Curious, I stopped one of the men at the end of the session and said, “If this wasn’t sponsored by the women’s group would more guys show up?”  Without hesitation, he responded with a smile, “Of course, most men don’t go to a chick event.”

I suggested to the HR leader in charge of the series, “Why don’t we get individual business unit leaders to sponsor the remaining three sessions, and ask the women’s leadership group if they would become a silent partner?  Maybe we’ll get more men to show up.”  The head of the women’s group thought it was a great idea, but the HR leader wasn’t so sure, “Well, okay, but don’t be surprised if only a few attend.”  P.S. the last three sessions were so popular that they added a fourth session.  And more than half of the attendees were men.  The HR leader and the male business leaders who sponsored the seminars now understood that work+life flexibility wasn’t just a woman’s issues, but an issue for everyone.

It allows us avoid the hard work we need to do to make flexibility part of the way business operates and individuals manage their lives.

Isolating work+life flexibility as a women’s issue is a feel-good, red herring.   What we really need to do is fundamentally rethink how we all work, manage our lives and run our businesses.   That’s going to require innovation and creativity which is not easy.  Today, rapid change and uncertainty are the norm, making flexibility and resilience imperative if we are to thrive.

Hopefully A Woman’s Nation is the last public, high-profile media event that so directly and publicly links work+life flexibility and women for all the reasons I listed above.  Going forward, let’s focus money, firepower, effort, and exposure on the truth that it’s about all of us, which, in turn, will help women more.  What do you think?

18 thoughts on “Stop Talking About Work+Life Flex Solely in the Context of Women…Really, Seriously, Once and for All”